Test fairness is a critical concern in all high-stakes testing programs.

The ASVAB Testing Program attempts to ensure that the ASVAB tests are fair for all examinees by adhering to the principles outlined in a number of test development guidelines:

The occurrence of bias is problematic, because it can negatively affect test validity. Adverse impact does not reflect bias if validity research shows that the test is equally valid for relevant subgroups (i.e., if the regression line relating the test score and a criterion is the same for each subgroup). 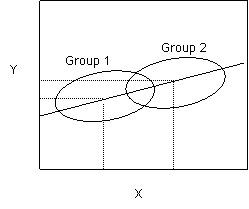 The figure illustrates such a scenario, where Group 2 performs better than Group 1 on a test [X], yet the regression line for predicting performance on the criterion measure [Y] is the same for both groups. Thus, the performance difference does not reflect bias because examinees with the same test scores will have the same predicted performance, regardless of group membership.

The occurrence of adverse impact is often determined using the Four-Fifths Rule:

“A selection rate for any race, sex, or ethnic group which is less than four-fifths (or eighty percent) of the rate for the group with the highest rate will generally be regarded by the Federal enforcement agencies as evidence of adverse impact.”

— Code of Federal Regulations Pertaining to the U.S. Department of Labor

Although adverse impact does occur on the ASVAB, the magnitude of Male/Female, White/Black, and Non-Hispanic White/Hispanic score differences on the Mathematical Knowledge, Arithmetic Reasoning, Word Knowledge, Paragraph Comprehension, and General Science subtests are similar to the magnitude of score differences between like groups on tests of similar domains in other high-stakes test batteries. The consistency of trends in effect sizes observed across different test batteries suggests that the adverse impact associated with the ASVAB reflects a societal phenomenon, rather than bias in the test.

This conclusion is supported by a study of the sensitivity and fairness of the ASVAB technical tests (Wise, Welsh, Grafton, Foley, Earles, Sawin, & Divgi, 1992). The study compared prediction of final school grades for Air Force and Navy technical training courses and scores on the Skill Qualification Test for first-term Army recruits. Data from large samples of males, females, whites, and blacks were analyzed, and the prediction lines were similar for all groups.

The ASVAB Testing Program routinely conducts analyses to ensure that items and scores are fair and unbiased.

As part of the review of the statistical qualities of new items, differential item functioning (DIF) analyses are conducted. DIF occurs when items perform differently across groups matched on ability. DIF is a necessary, but not sufficient, condition for bias. Because all statistical procedures have some rate of false positive identification, items flagged for DIF typically undergo further review to determine if the statistical finding is supported by the item’s content.

DIF analyses are conducted for the following pairs of subgroups for which there are sufficient data to provide stable results:

An Empirical Bayes Mantel-Haenszel procedure (EBMH) is used, and the severity of DIF is classified using the following scheme:

A = Negligible
B = Slight to moderate
C = Moderate to severe

The EBMH procedure and the classification scheme are described further in Zwick, Thayer, & Lewis (1999).